The embroidery of the Digital Commons continues through a mixture of localised and international networks enticing stitching novices and experts some of whom are programmers, mathematicians, hackers and tinkerers.

The embroidery of the term 'Meme' from the Embroidered Digital Commons was initially taken up by Unruly Media then continued at Furtherfield Gallery in Finsbury Park as part of the 'Being Social' exhibition. Here the project culminated in a  MzTEK soft-circuitry workshop where women learned how to create an electrical circuit using conductive thread, switches and L.E.D's. See the photos on Flickr here, and on the MzTEK pages on Facebook. There's also an Embroidered Digital Commons Group on Facebook. But the stitching of Meme will continue... 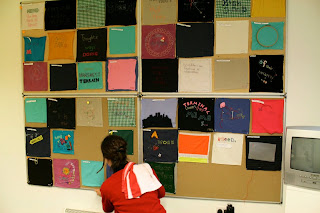 The text is about half-way complete, so we are very excited to be invited to take part in the Flossie 2012 conference at Queen Mary University on May 25-26th, where people can contribute their stitches and switches to the embroidery of 'Meme'.

Flossie is a network of women interested in Free Libre Open Source Software (FLOSS). It's an independent network of women practitioners that has its roots in social change movements as well as arts, technology and academia. Whether you code, tinker or want to explore alternatives to ‘big-tech’ corporations, all women are welcome to this conference.  The 2 day conference is free / donations but you need to book your place at eventbrite. 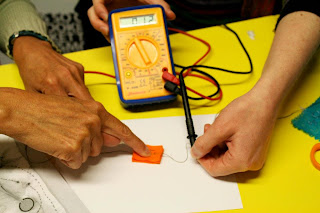 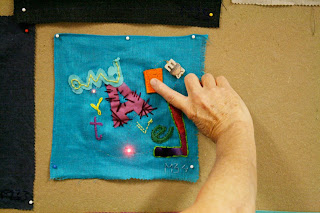