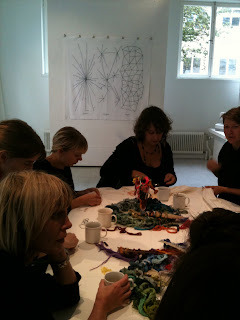 As part of the Öppen Syjunta event we formed a Many:Many sewing circle to stitch our six degrees of separation based on centralised, decentralised and distributed networks. I gave a short introduction to how network topologies are illustrated, based on my embroidery of Paul Baran's diagram of distributed communications (hanging on the back wall in this photo). Then we started to stitch our network. Everyone embroidered their name, as they chatted to the person next to them to find people that they might know in common. The tablecloth was quite big and the connecting lines took sometime to stitch, so we took some shortcuts too. After the event Margareta had some time to add her name and connections too. Anne Diedrich from Mobile Life came along and added her knowledge of Baran's diagrams and packet switching to the discussion. Thanks to Kerstin Bjork, Elisabeth Westerlund, Nina Holst, Annie Johansson, Tina Skantze, Asa Stahl, Kristina Lundstrom, Anne Diedrich and Margareta Klingberg.

For more information, click on the '6 Degrees of Separation' button on my website: http://www.elecarpenter.org.uk
Posted by Ele Carpenter at 8:00 pm