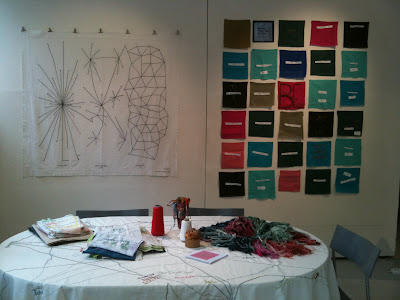 The stitching of the term ‘Gift’ at HV Galeri in Stockholm provided an opportunity to reflect on the text by the Raqs Media Collective, and the contemporary experiences of the embroiderers. As everyone stitched I tried to describe the process of the event by considering the language and concepts of the term in the lexicon. It still needs polishing - but here's the first draft:
“Gift: Something freely given, and taken, as in free code. Gift givers and gift takers are bound in networks of random or pre-meditated acts of symbolic exchange. The code begets the gift as the form of its own survival over time. In this way a gift is a quiet meme. Reciprocity begets reciprocity. The principle of the gift demands that the things being given be price-less, in other words so valuable as to be impossible to quantify in terms of the possibilities of abstract generalised exchange. The gift must at the same time, be easy to bear and keep, easy to use and there must be no guilt involved in its destruction or dispersal when its use value either changes or demands re-distribution in order to be effective. Gifts open doors to our own possibilities of generosity. In this way they facilitate access to the things we did not even know we had. And, there is such a thing as a free lunch, although it requires the pursuit of a special recipe.” (Raqs Media Collective, 2003)
The Oppen Syjunta workshop was a space in which people came and went, freely coming and going, sometimes sewing, and sometimes not. The networks of embroiderers, artists and crafters came from the Points of Departure Exhibition, HV Skola, Mobile Life, Konstvack, and the HKD School in Goteborg.

The handmade or handcrafted is strongly associated with gift culture. People carefully craft beautiful textiles or carvings for their children or godchildren to be handed down through the generations of their family. These objects are commonly described as an expression of love and care. Whilst these objects can be open-ended gifts, they can also be evaluated in terms of their gift-exchange value. Asking what is expected in return? In many ways the pleasure of making the gift is seen as its reward, but it also has embedded social values and expectations.

The text was divided into sequences of between 3 and 7 words, each sequence to be embroidered by a different person. Most people chose to embroider words that had a synergy with their own ideas. Their acts of creativity were both random in their expression, but pre-meditated in their selection. The participation of over 1,000 people in the EDC is creating a quiet meme of the digital commons over several countries over time. The stitching of embroidery for a collective project encourages others to give in the same way. And for people to value the journey of the stitches in a global project. But of course the value of the experience is different for everyone. Margareta talks about anthropological research into the nature of the gift -  that you should return a gift with another, but there is a certain amount of time that has to pass before the gift is reciprocated…. but it must not be too long, because the exchange wont balance if the original gift is forgotten.
In EDC the stitcher gives their time and skills, and instantly receives fika, friendship and good conversation. But further reciprocity lies in the second wave of the gift of experience, where the embroidery sits alongside others, and forms a giant international network, presented online and through public exhibitions. Anna Maria tells me that she will take away a good memory of experience. She looks forward to receiving feedback through email, and being connected to other people through the project. She says “If I look back 20 years this would have been impossible – I was too busy working and producing, having meetings. So just to be here without feeling any stress is so relaxing.” And we discuss the ethics of work and leisure. What about the protestant work ethic that “The devil makes work for idle hands”? Handwork prevents you from looking lazy, prevents you from doing bad things. we discuss Grizelda pollock's book the Subversive Stitch, where she describes how embroidery makes the sewer look wealthy, as they are clearly part of the leisured class.
But today, the way in which embroidery helps the stitcher to concentrate and listen seems to be a recurring theme. Margareta tells a story of a job where she had to look over children at night, where she wasn’t allowed to watch TV but could embroider. In this situation, TV was perceived as being 'too much' leisure, and too noisy, but embroidery is a form of work which enables you to listen at the same time. Anna Maria is stitching the words ‘BE PRICELESS’.  She reflects: “To simply ‘to be’ – is priceless. Just ‘being’ has a very important value. Stitching and handwork is about being in the moment – to fully experience life. It’s the best way of living and listening.” Margareta is stitching the words THE PRINCIPLE OF THE GIFT, she says: “Nokia has an advertising slogan that says their mobile phones connect people.  I’d like to subvert their statement and say that embroidery connects people – either to each other, or even connecting to yourself in a contemplative and reflective way.”
Johanna is stitching the words EASY TO USE as she talks about the value of gifts. She tells us: “As a child my father always wanted me to give him a homemade gift for Christmas, even though I wanted to buy him something. But now, as an adult, when I visit him at work – he has kept all my faded handmade gifts on his desk.”
Emese Benczur’s artwork often uses embroidery or textiles to write text in public spaces. Her work investigates the value of creative labour from different perspectives. Works include: ‘It must be wonderful to have so much free time’. She stitches the words GIFTS OPEN DOORS. Jane Tangvar continues the sentence TO OUR OWN POSSIBILTIES OF GENEROUSITY. Ele stitches THERE IS SUCH A THING AS A FREE LUNCH whilst eating Margareta’s wonderful blueberry tart, a very special Swedish recipe.
Posted by Ele Carpenter at 8:30 pm

Nice to read something original and thought provoking. I like your comment that embroidery can connect yourself to yourself. Handmade gifts are lovely to give and receive. I still have all my mothers box of embroidery silks which always reminds me of her sitting embroidering endless tablecloths after using those iron-on transfers. Nice blog.