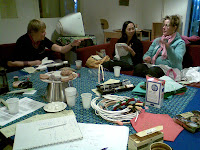 Artists and designers in Umea joined fine art students and an interaction designer and writer at the OSE Fika at the Konsthogskolan on Thursday. There was an interesting discussion about possible connections between object based programming and creating a knitted object... so we'll see what happens.

Whilst computer code is always in English, knitting patterns use language specific abbreviations. Suzanne has taken on the ambitious project of knitting a cover for one of the giant flat-screens in HUMlab. The knit will include letters describing the knitting pattern for the cover. Charlene has just moved to Umea from the US and is stitching her new Swedish vocabulary by hand.

For the OSE Fika at the Art School on November 13th we will be joined by interaction designer Camille Moussette, who is an advocate of Open Source in his work. Camille is currently doing research at the Umea Institute of Design. See his HAPI project.
Posted by Ele Carpenter at 6:59 pm