Ada Lovelace (1815 - 1852) was an analyst and metaphysician and is often referred to as the first computer programmer. She worked with Charles Babbage on the Analytical Engine, the precursor to the modern computer. Lovelace made extensive notes accompanying the engine, in which she describes how it could be programmed, and the broader scope of its potential. She wrote:

"The distinctive characteristic of the Analytical Engine, and that which has rendered it possible to endow mechanism with such extensive faculties as bid fair to make this engine the executive right-hand of abstract algebra, is the introduction into it of the principle which Jacquard devised for regulating, by means of punched cards, the most complicated patterns in the fabrication of brocaded stuffs. It is in this that the distinction between the two engines lies. Nothing of the sort exists in the Difference Engine. We may say most aptly that the Analytical Engine weaves algebraical patterns just as the Jacquard loom weaves flowers and leaves."
P Morrison and E Morrison (eds.), Charles Babbage and his calculating engines (New York, 1961).

I've embroidered the hyperlink that enables you to jump from this page to the web page about Ada Lovelace on the Computer History Museum's website by clicking on the words 'Ada Lovelace' above. 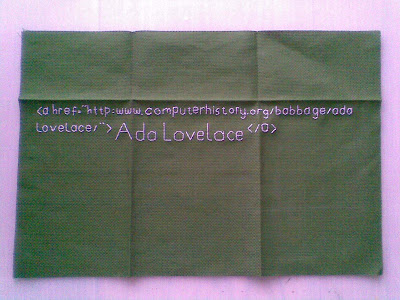 Posted by Ele Carpenter at 1:43 pm

That looks great! You should make your site look like that. It's a good style for you.