Today I’m at the FadFest ‘Open Design / Shared Creativity’ Conference at the CCCB in Barcelona. And it’s great to be back in such a hot and energetic city, despite a 7 hour delay to my flight! A couple of years ago I came to give a paper at the CCCB which has since been published in the ‘Textile Reader’ (ed J. Hemmings). I discussed the ‘Embroidered Digital Commons’ in my paper, but we never got round to running a workshop. So when FadFest invited me to this conference it seemed the perfect opportunity to add Barcelona to the international ‘Embroidered Digital Commons’ network. During the next 2 days conference participants, with help from students at the BAU School of Design are invited to stitch the term ‘Ubiquity’as follows:

"Ubiquity:  Everywhere-ness. The capacity to be in more than one site. The simple fact of heterogeneous situation, a feature of the way in which clusters of memes, packets of data, orbit and remain extant in several nodal points within a system. The propensity of a meme towards ubiquity increases with every iteration, for once spoken, it always already exists again and elsewhere. It begins to exist and be active in the person spoken to, as well as in the speaker. Stories, and the kernels of ideas travel in this way. A rescension, when in orbit, crosses the paths of its variants. The zone where two orbits intersect is usually the site of an active transaction and transfer of meanings. Each rescension, carries into its own trajectory memes from its companion. In this way, through the encounters between rescensions, ideas spread, travel and tend towards ubiquity. That which is everywhere is difficult to censor, that which is everywhere has no lack of allies. To be ubiquitous is to be present and dispersed in 'no-des'. Sometimes, ubiquity is the only effective answer to censorship and isolation." (Raqs Media Collective, 2003). 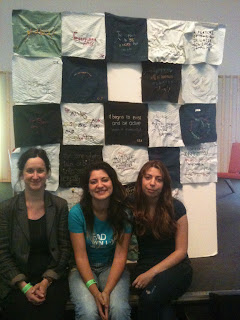 Here's a picture of me with Sara and Isobel who co-ordinated the embroidery of Ubiquity throughout the conference.

Interestingly, the term ‘ubiquity’ has a high frequency of other terms from the Lexicon such as ‘data’, ‘heterogeneous’, ‘iteration’, ‘meme’, ‘orbit’, ‘rescension’, ‘site’, and ‘zone’. But it is the term ‘rescension’ which causes the most confusion because it’s not a commonly used word, and it doesn’t seem to appear in many dictionaries. However, when I facilitated a workshop at the Digital Humanities Conference in 2010, many academics explained their understanding of the term to me. A ‘rescension’ is a version or an iteration of a text or code script that can continually change, evolve or be updated. This results in the provisional nature of the ‘original’ challenging traditional forms of linear knowledge and history. For example, the academic researcher gives up the quest for the ‘true’ document, and gathers together the various rescensions to compare and contrast their different ideas and positions. In this way knowledge is formed not by knowing a so-called ‘truth’, but by understanding the relationship between different ideas and approaches.  Here knowledge becomes a form of enquiry and questioning about the nature of something, rather than an exercise in rote-learning or a search for a singular idea of truth.

In the context of curating contemporary visual art, there are many ways in which ideas and concepts can be explored visually, aurally and textually. The role of the curator is not simply to mix and match texts with artworks, but to map objects and ideas that can be reconfigured in a number of different constellations. In this way objects are not simply positioned in a space, but bring a network of histories and future possibilities to the discussion. An artwork could be described as one rescension of an approach to ideas and materials, so to understand an artists’ practice it’s necessary to view the different rescensions of their work. From a different perspective, we can only understand rescensions of ideas at large if we include a range of works by different artists. In both scenarios, the contextual and material processes involved in the work are part of the object of study.

I’ve just got back from Documenta 13 in Kassel, Germany, where the politics of objects and materials seemed to flow poetically through the exhibitions. Here ceramics, computing, drawing, film, plants, sculpture, textiles, and electronics all came into play, and the distinctions between art, craft, design and new media finally seem redundant as categories for art. One exhibition that I found pertinent and beautiful was by Haris Epaminonda and Daniel Gustav Cramer’s. The artists reconfigured a series of objects throughout a number of rooms in the North side of the Railway Station. Here a metal bar propped against the wall in the first room became a perpendicular sculpture in another room, standing proud as any Giacometti. But a floor or two up, the bar formed a barrier to the viewer, dividing the room in two. A simple gesture, but one that explores the aesthetics of rescension perfectly. The metal bar along with it’s companion photographs and ceramic bottles existed in several places at once, increasing in familiarity as you climbed the floors of the building, rediscovering them at every turn; checking to see if the images in the room were the same or slightly different to the room below. The colour of the petite ceramics repeating through different shapes from the room before. Partly proving that objects as well as ideas are everywhere, ubiquitous even, you just have to be looking for them.
Posted by Ele Carpenter at 7:15 am