A good idea is a live meme, it is infectious and keeps recurring. So it seems highly appropriate that the term 'Meme' should be stitched at the Being Social exhibition the new Furtherfield Gallery in London, February - April 2012. 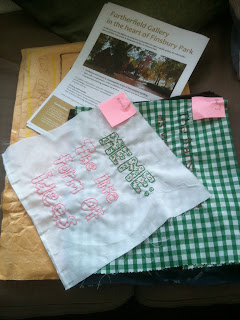 Back in 2008 Furtherfield presented the 'Open Source Embroidery Craft + Code' exhibition in their old HTTP Gallery. The exhibition included the finished Html Patchwork (complete with a patch embroidered by Furtherfield), but we didn't run any new workshops to bring people together to discuss ideas and make a new work. Since then, the Embroidered Digital Commons has grown into an international distributed embroidery, and it seems the right time for Furtherfield to get involved. So it is in the spirit of reaffirming old networks and new establishing new dialogues, that the term 'Meme' from the Embroidered Digital Commons will be stitched in the new space.

This Spring I'll be working with Emilie Giles and her Unwooly craft group to take turns in hosting the workshops, and we'll be inviting special Meme guests to come along to some of the workshops and discuss their approach to memes and the digital commons (details to follow). We're also very excited to be working with MzTEK to run a workshop for women to learn electronics to add additional features to their embroidery (details to follow).

We're inviting crafters, artists, computer programmers, dog-walkers and pram-pushers to come along to the Saturday Morning Workshops throughout the exhibition to find out more about the project and contribute to the term 'meme' below:

"Meme: The life form of ideas. A bad idea is a dead meme. The transience as well as the spread of ideas can be attributed to the fact that they replicate, reproduce and proliferate at high speed. Ideas, in their infectious state, are memes. Memes may be likened to those images, thoughts and ways of doing or understanding things that attach themselves, like viruses, to events, memories and experiences, often without their host or vehicle being fully aware of the fact that they are providing a location and transport to a meme. The ideas that can survive and be fertile on the harshest terrain tend to do so, because they are ready to allow for replicas of themselves, or permit frequent and far-reaching borrowals of their elements in combination with material taken from other memes. If sufficient new memes enter a system of signs, they can radically alter what is being signified. Cities are both breeding grounds and terminal wards for memes. To be a meme is a condition that every work with images and sounds could aspire towards, if it wanted to be infectious, and travel. Dispersal and infection are the key to the survival of any idea. A work with images, sounds and texts, needs to be portable and vulnerable, not static and immune, in order to be alive. It must be easy to take apart and assemble, it must be easy to translate, but difficult to paraphrase, and easy to gift. A dead meme is a bad idea."
(Raqs Media Collective, 2003).

Posted by Ele Carpenter at 8:27 pm

Read a lot of blogs specially interesting ones like your blog, Good post! I accidentally found your site on the internet, I am going to be coming back here yet again.Love Information Is Beautiful. Keep posting!