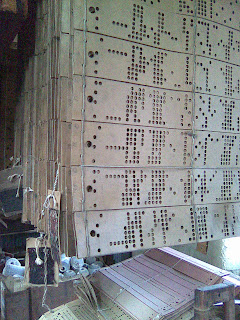 You never know what first hand observation will reveal. But going back to first principles (in mathematics) was of key importance to Ada Lovelace. In the 1840s she conducted a tour of the machines and feats of the industrial revolution including weaving mills using the Jacquard Loom. Betty Toole writes:

"Rather than relying on verbal explanations, Ada informed readers that if they wished to see how the punch card and the Jaquard Loom worked, they should go and see the exhibit of the machine..."
(Toole, 1992, p252)

Following in her footsteps, in a kind of reverse engineering of our knowledge, Simon Blackmore, Alex Hodby and I went to the Macclesfield Silk Mill and Museum to see for ourselves exactly how these looms worked. We were treated to a comprehensive tour of the museum, the evolution and trade of silk and the working looms by Director Richard DePeyer. It was incredible to see these 19th Century machines creating photographic-like images using thousands of threads all controlled by a sequence of binary punch cards. Richard took us through each step of the process from the perspective of the production of silk. Interestingly, to work out how the cards were made we had to work backwards through the display. Starting with the translation of an image plotted onto graph paper, punching the card, setting up a loom threads and cards (complete with a code to ring the bell to tell you when to change the colour of the thread). The process of using a hole-punching machine to translate the drawing onto a punch card seemed rather like playing a piano, but using eight fingers (8 bits?) to punch or miss a hole to create a sequence in the weave. 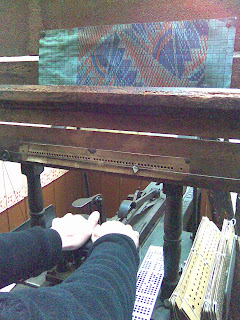 When looking at the looms, it was clear that the cards loop to repeat the pattern, which would need to be far more flexible and interchangeable for any computational or algorythmic process. Betty Toole describes how Babbage adapted Jacquard's punch card system for the Analytical Engine, improving the way in which the cards gave instructions to the loom. However, it was the regrouping and 'backing' of the cards which was unique to the mathematicians work, as Ada writes in her notes to the Analytical Engine, Note C, p706:

"The mode of application of the cards, as hitherto used in the art of weaving, was not found, however, to be sufficiently powerful... to fulfill the processes of the analytical engine. A method was devised of 'backing' the cards in certain groups according to certain laws. The object of this extension is to secure the possibility of bringing any particular card or set of cards into use any number of times successively in the solution of one problem..." (Toole, 1992, p253)

But the principle of using binary programmes to create complex patterns and images has inspired the development of computing as much as the desire to communicate. And it is Ada Lovelace with her love of "poetical science" who understood the visual and metaphorical relationships between art and science which enable us to envisage and conceptualise computational processes.

Now I am stuck somewhere in a loop of punchcards, like a film loop, or rather a digital sequence,  where one change in the sequence enables an action to take place. Perhaps a mechanical version of Graham Gussin's Fall (7200-1) a digital film/programme made in 1996 where viewers can wait hours for the random occurance of a splash in the still surface of a lake.

Meanwhile Will Bradley has curated an interesting exhibition called Fragments of Machines at IMO Projects in Copenhagen, including Tauba Auerbach, Claire Fontaine, Travis Meinolf, Craig Mulholland, Lillian Schwartz, and Hayley Tompkins. I wonder if it could tour to the Silk Museum?
Posted by Ele Carpenter at 10:53 am

We've just started using small piano players to play sound from pattern - feeding samples of our collective pixel drawings - created by punching holes in either the black or the white squares - through the machines then sampling and looping these sounds using a loop pedal. So punch card loop indeed!!