Here is the story of my map of the social networks that brought me to the Micro Makers Fair at the May You Live In Interesting Times festival at Chapter in Cardiff this weekend, and the new people I met, and the people we know in common. 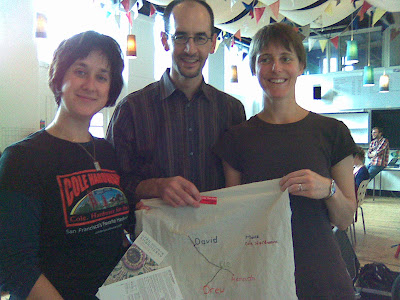 On the first day I wore my Cole Fox Hardware Store T-shirt for the first time. I bought the T-Shirt whilst I was installing the Open Source Embroidery exhibition at the Museum of Craft and Folk Art in San Francisco, where I made regular visits to the shop that sells everything, including red blue and green masking tape (see a future post on the missing arthistory of Mondrian’s love of American masking tape). The window display of the store is designed by an artist to exquisitely present hardware objects by colour. So imagine my surprise when 2 visitors to the Fair recognize my T-Shirt and pull out their house keys with a Cole Fox key tag – we are instantly connected in our love of the store, and they tell me their story of their move from San Francisco to Cardiff. Catherine stitches Mark’s name and 'Cole Fox Hardware' onto the map, whilst Mark entertains their little boy. 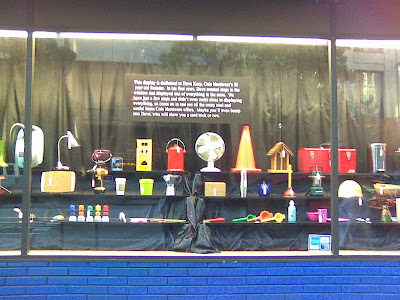 I was invited to take part in the Micro Maker Fair by Hannah, who I’ve known since the late 1990s when we both lived and worked in Newcastle. We’ve loosely kept in touch partly through art events, bumping into each other in Venice, and partly through our dear friend Julie. I knew Hannah would be super-busy with the opening of the newly refurbished Chapter Arts Centre and running the festival, so I stitched her name onto my network map. At the GwdDiHw (Goodie Who) bar I met Matthew and Tomascz who explained that they were living in Interesting Times in Cardiff. Matthew teaches computer gaming things at the University with Corrado whom I recognized from the opening of OSE at HTTP back in May 2007, Corrado knows Mark and Ruth from Furtherfield. They also know Hannah through Chapter. Then FutureEverything Drew arrived so I added them all to a sketch on the back of my print out of a google map of Cardiff. They all promised to come to the Maker Fair to stitch their names on the map. Drew came along and diligently stitched his name in bright orange. The others didn’t turn up, and I remember that real networks are formed by the people who show up. 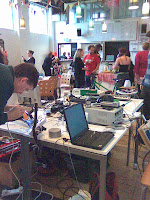 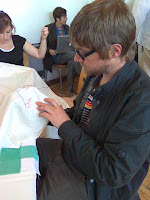 The Fair is a hectic mix of stalls in the Chapter Stwdio. I'm squeezed between Dorkbot Bristol and wonderful Piano Migrations.

Later in the afternoon Alison from Bracket drops by the stall – Ah! She knows David Littler from the Sampler Culture Clash project in Brixton, they have similar music interests and often go to the same gigs. We spend an hour or so discussing our work. Saul drops by from The People Speak – he knows Hannah, Drew and me, so the connecting network lines will get interwoven when Saul is added. He has to write some code and doesn’t have time to stitch. I promise to add him on another time.

In the Chapter Café Bar I bump into my old friends Jo and Roy who I know through exhibitions, art film screenings and conferences, but also because my parents live near them in Southampton. We all attended our friend Debbie Fenwick’s wedding in Northumberland years back, and spent a tense hour driving around fantastic countryside looking for the country house, and arriving just in time for the ceremony. I love Jo because she talks about her job as a curator of Aspex Gallery in a very straightforward way. And of course Hannah and Jo know each other through work and location connections too.

When I meet up with Jo and Roy later in the day they are having coffee with Ellie Harrison, the data collector extraordinaire and Neil Mullholland, whom I’ve nearly met on many occasions, but not quite. I first met Ellie through LabCulture in Bridport, and organized an exhibition including her work at Peterborough Art Gallery sometime in 2003 I think. Ellie starts to stitch her name, but is called away by promises of a curry, so I giver her the whole map for her to sew in her own time and post it back to me…..

As Sophie stitches her name onto the Maker Fair map she quizzes me about why I think people have such a strong need to articulate their social networks, she thinks people are scarred of being invisible. I return to Baran’s notes on distributed networks – his vision in 1964 was a communication network which was indestructable. I think there’s an interesting correlation between Sophie’s survivalist stall of Wild Wood weapons for hunting and the need for a survivalist communication network. A point not missed in Heath Bunting’s work, and of course Sophie is selling Heath’s ‘Throwing Stones’. I decide to add Heath and Sophie to my network when I get it back from Ellie.

My other plan was to invite people to ‘speed-date their 6 degrees of separation’ and embroider their connections. But you just can’t ‘speed-stitch’, it’s a process of slowing down and careful precision. So whilst some people drew their 6 degrees of separation, there was too much going on for people to sit and sew their network. This is a project for hours of concentration.
Posted by Ele Carpenter at 9:50 am

HI ele
really nice to see you again at MYLIIT maker faire, enjoyed the embroidering...- this is the swedish electronics and sewing project i was telling you about
http://www.syntjuntan.se/

It was great to meet you - and I should add the story of the tea making bike ride at the Enter Festival where we first met.... although I think that'll be on the Maker Fair Embroidery which still needs a plan to progress....
Ele