It's about time that I dealt with the question of open source curating, and what this might be. Not only is the methodology of OS seeping into institutional discourse (see the debate at Positions in Flux), I'm increasingly aware of the 'unconventional' methods of curatorial research which I have undertaken for the Open Source Embroidery exhibition. I've also just started teaching on the MFA in Curating at Goldsmiths which is immersing me in diverse curatorial cultures and practices.

There are certain protocols which are ingrained in an unwritten ethics of curatorial practice which I professionally uphold, for example: don't show your own work in an exhibition you are curating; always view work in its real time and space (or the space/media in which it was made) before you show it. Then there are considerations of 'aesthetic standards', 'critical rigour' and 'conceptual integrity'. I use inverted commas here because these criteria are nebulous, hard to define, and often critiqued by art itself. I would probably refer to my process of preference (dare I say selection) as based on the critical relation between form and content, and the ability of the work to problematise the way meaning is constructed in the world. But in general curatorial selection seeks to maintain professional and critical standards. So what happens with open processes? Of course there is no such thing as pure openess - open exhibitions include a large amount of solicited works. Open Calls are sent to certain networks, even Linux was developed on a fairly centralised model. In open methodologies the principles of organisation are defined by the participants in the group. Whilst artist-run spaces have the ability to make such tactical manoeuvres, the institutional requirements of art galleries and museums require more strategic planning, or so they say. My curatorial role flirts with both tactical and strategic modes of operation, and the principles are set through dialogue and discussion with both artists and the exhibition team.

In Open Source Embroidery I break all the rules. I have included my own artwork in the exhibition, selected works recommended on the OSE email list, and am showing some works that I've never seen. Many artworks are by people who have taken part in workshops, and in most museums they would be relegated to the education spaces. But this is the whole point of the project, and rather than compromising the exhibition, the use of 'open source' to transgress the protocols of high culture is a delight. A delight that enables the ethical frameworks of creative practice to become transparent. The politics of the Everyday, the Personal, and of the methods of production and distribution are what is being investigated here. The materials are craft (mostly textiles and some plastic) and code (mostly HTML, some Processing, lots of pixels and some knit patterns). But I fall back to my fine art education and clearly state that I'm no programmer or knitter and I'm not in love with fabric or cables! It's true that I'm not interested in material or technological determinism, or the ambitions of 'fine craft' or even (for this moment in time) the completely horizontal artspace.

Open Source Embroidery is not an 'open' exhibition in the traditional sense. The exhibition has been researched and selected by me. However 'open-ness' did take place at the OSE workshops, and the exhibition will include artworks by people who got involved in the project and made interesting things work. Also curating is not a solitary process, like most jobs it involves working very closely with a team within the constraints of time, space and money. It's also probably accurate to say that the Open Source Embroidery exhibition is an outcome of a research process. It began with B+B back in 2005, when I started to embroider a scarf as a tool to discuss the politics of open source software with artists using open methods in socially engaged practice. My desire to make things to embody the complexity of social and technical language through a folk history of making and collective culture in both craft and coding led me to such an amazing range of artwork I felt that a curatorial response was appropriate.

The challenges of hanging the exhibition start next week. It's all about balancing the critical relationships between works in the exhibition so that people can find their own way through. The works need to have their own space, but also a complex set of juxtapositions without fixing meaning, or worse determining a narrative. Although there are common themes explored through the workshops. A key concern is to present pieces as current, and not static moments in time (always tricky in a museum), to keep the energy and dynamic aspects of process rather than being archival.

Here's Emma Ferguson on her fantastically beautiful stall in Brick Lane market. Emma is showing a selection of embroideries from the 'Expression of Femininity' series, and has made some embroidered tech jewellery for sale during the exhibtion. 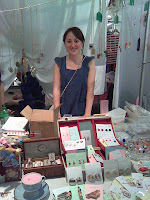 Posted by Ele Carpenter at 8:51 pm