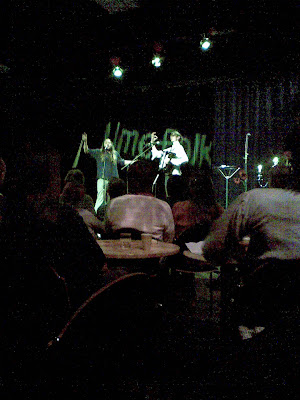 Matt Cowan invited me to embroider a handkerchief for his exhibition at the English Dance and Folk Song Society at Cecil Sharp House in London (opens April 29th). I carried the envelope with the music to the song 'Flash Company' round in my pocket for several months, waiting for an opportune moment to arise.

So when I heard about the Umeå Folk Festival in February - I had to go along with a needle and thread in my bag. On the first day I met up with my friend Phil and lost my ASCII green thread in the bar, so not much sewing took place. But I went back another night and met up with Magnus and Linda, still searching for inspiration for my stitches.

Then the amazing Nano Stern took the stage. On arriving in Sweden Nano was intrigued to hear a children’s song familiar to him from Chile. Nano sang his own version of the song, starting with the original character of the spider, but translating the work of the spider into the idea of a worker, and the spinning of thread into knitting. Weaving together the threads of webs, workers and making, Nano’s passionate song struck a chord with my project. I took out my needle and thread and started stitching in the dark. The picture above shows Folkoholics intense combination of Nano Stern and Matija Solce in the full infectious energy of their song. They certainly blew away the cobwebs from my memories of folk (sitting on a hay bale drinking cider in Cornwall) and brought the whole room into the present with Czech-Chilean humour.

To keep my tradition of html stitching, with a nod to the folk culture of the net, I added www.folkwiki.se embroidered across the bottom of the handkerchief.
Posted by Ele Carpenter at 7:21 pm

That sounds like a fun exhibition! Mark used to work at EFDSS.